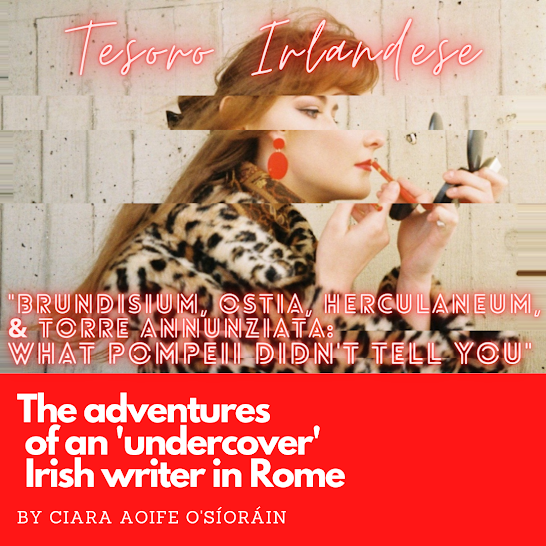 Here's a quick run down on Brundisium (Brindisi), Ostia Antica, Herculaneum and Ancient Oplontis (Torre Annunziata) for those brave enough to leave the Eternal City for a trip into antiquity.

Nowadays, Brundisium is known as Brindisi. Found on the Adriatic coastline, south of Rome, this place is a must-see for all Classical Civilisation nerds like me. Despite there being sparse remaining archaeological ruins, there is a wealth of early-settler ceramics and artefacts which are fascinating and historically rich. 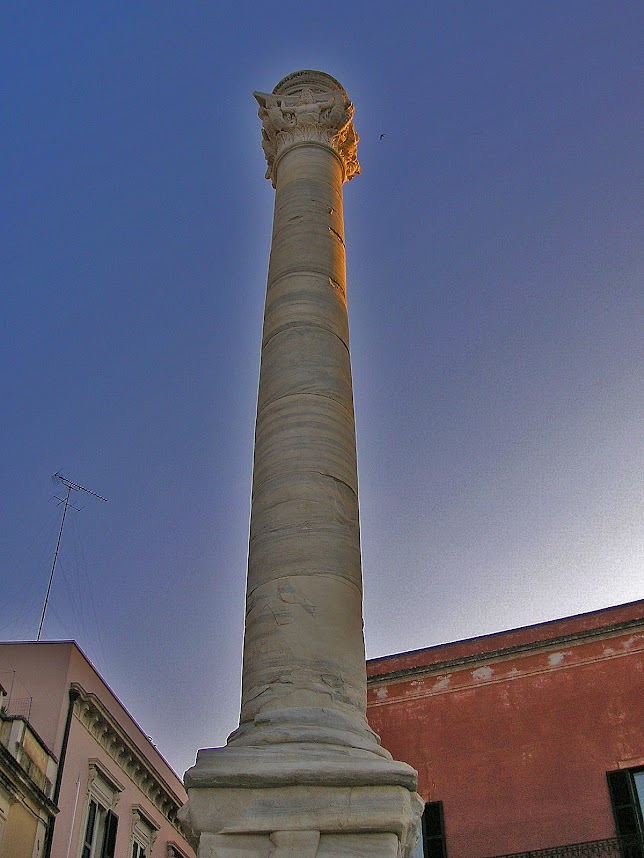 Brindisium has a long-standing connection with Rome, officially established as a colony of Rome in 247 BC. It was an important port city that is directly connected to the Ancient Appian Way. It was from here that armies launched their attacks into the South and East, playing a vital part in the Punic Wars (264-146 BC). I first encountered the city in Horace’s Satires Book 1 Satire 5, ‘Journey to Brundisium’ while studying for the Leaving Certificate exams. Following this, Brundisium arose again while I was studying the formidable reign of Emperor Augustus, Rome’s first emperor. The Treaty of Brundisium was signed between Marc Anthony, Augustus and Lepidus, in order to divide the territories of Rome amongst themselves, after years of brutal civil war.

The city was bombed during the Second World War and has worked hard to rebuild itself, remaining an important port city for departures and arrivals to and from Greece and the Balkans. Brinidisi can be impressively hot, weatherwise, staying in the high 30℃’s (even reaching the 40℃’s) from May until October. There are countless restaurants and eateries there as well as the incredible historical sites, so you won’t starve or go without during your trip.

Ostia is another important port city for Ancient Rome located at the mouth of the Tiber river (Ostia being the Latin for ‘mouth’). It’s oldest discovered structure is that of the Castrum, a rectangular military structure dating between 396 and 267 BC.
It continued to be an important military base, as a naval port, during the Punic Wars against Carthage, much like Brundisium. In the second century, however, its purpose changed and it became used more commonly for commercial reasons, its population expanding with its success as a military and commercial port. 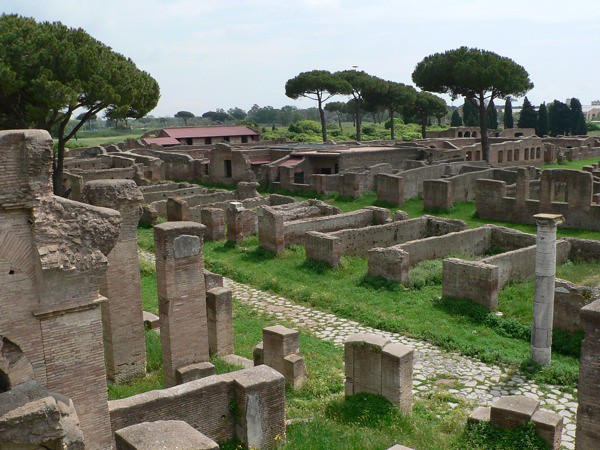 I became interested in Ostia as a result of my studies of Marcus Tullius Cicero and Julius Caesar. In 63 BC, the Roman statesman and orator rebuilt the walls of Ostia after the city and port had been badly plundered and damaged. Julius Caesar later proposed and implemented, during his reign as Dictator, that the port town be used to transport grain, giving Rome more control of its food supply. I studied Cicero and Julius Caesar’s letters during my undergraduate degree and became fascinated by them both as political characters.

Ostia is a greatly important archaeological site, with its buildings and art impressively preserved. Due to silting, the site itself no longer lies beside the sea, instead it is roughly 3km inland, yet still fairly close to the Tiber river. There are many impressive things to see within Ostia Antica, but one of the most fascinating is the Ostia Synagogue, one of the earliest, if not THE earliest synagogue identified in Europe so far!

Modern Ostia is a beautiful seaside resort, and remains a popular place for Romans who want to escape to the seaside. It’s literally only a 20-minute train ride from the Piramide station, so it is perfect for those travelling to Rome on a short trip or those like me who are looking to travel to all of the important Ancient Roman sites. 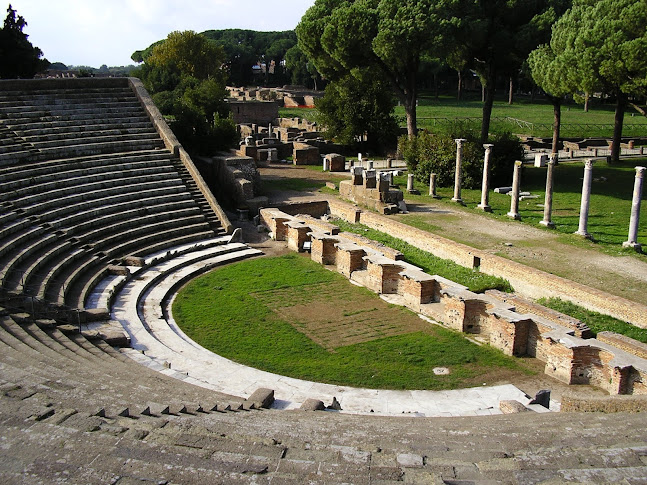 Another victim of the Vesuvius eruption of AD 79, Herculaneum is an archaeological site a little further south of the famous Pompeii. It is lesser known than Pompeii, but is nonetheless an important site for the history and archaeological findings of Ancient Rome. Having suffered an earthquake in AD 62, Herculaneum had not managed to rebuild itself before it was covered by the volcanic eruption of Vesuvius. However, due to the winds blowing during the eruption, Herculaneum was not impacted by the eruption as quickly as Pompeii, and many inhabitants managed to flee the town before the eruption became deadly and lava swallowed the surrounding cities. 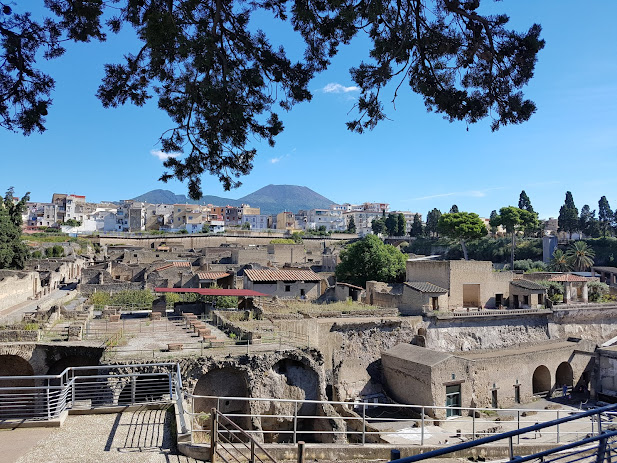 Herculaneum became covered in a dense layer of volcanic matter, making excavation of the site extremely arduous, but also, managing to preserve the city to a remarkable level, where much of the wooden and organic materials managed to survive, such as boat parts, food, cloth, papyri and furniture. This revealed a great deal about the way the people of Herculaneum lived up until their untimely, tragic deaths. Most exciting, in my opinion, of these preserved relics of Ancient Herculaneum is that of the artwork. Paintings, sculptures, bronze work and pottery were all found in brilliant condition during the excavation of Herculaneum. The discoveries of Herculaneum indicate that it was a much wealthier town than Pompeii; a seaside resort for the Roman elites. This is supported by the many beautiful villas that have been fantastically preserved. 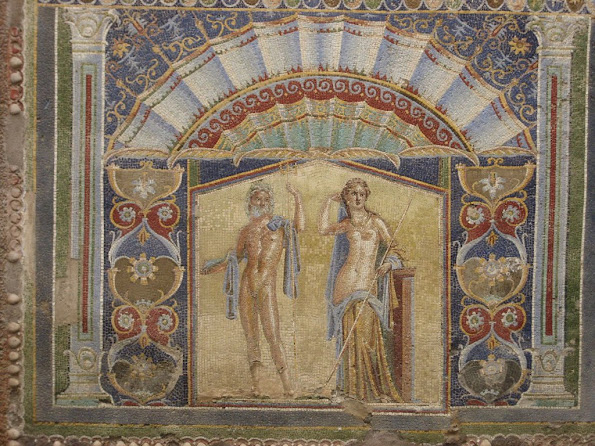 Torre Annunziata is located at the foot of Mount Vesuvius, a suburb of modern Naples, and was another town to be destroyed during its volcanic eruption. It is not as big or extensive an archaeological site as Pompeii or Herculaneum, however, it does have one of the richest Roman villas to have been excavated, known as the Villa of Poppaea. 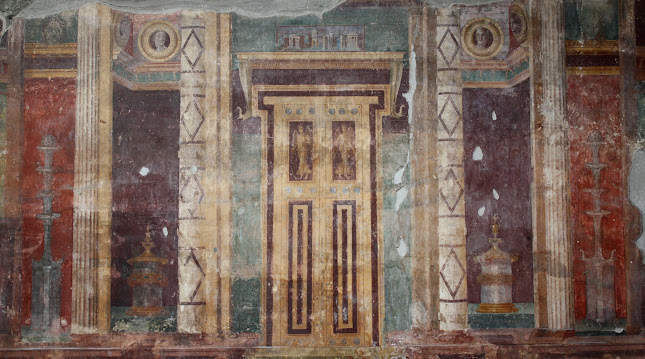 'Oplontis near Naples, Villa of Poppaea' by Tierceron on Flickr 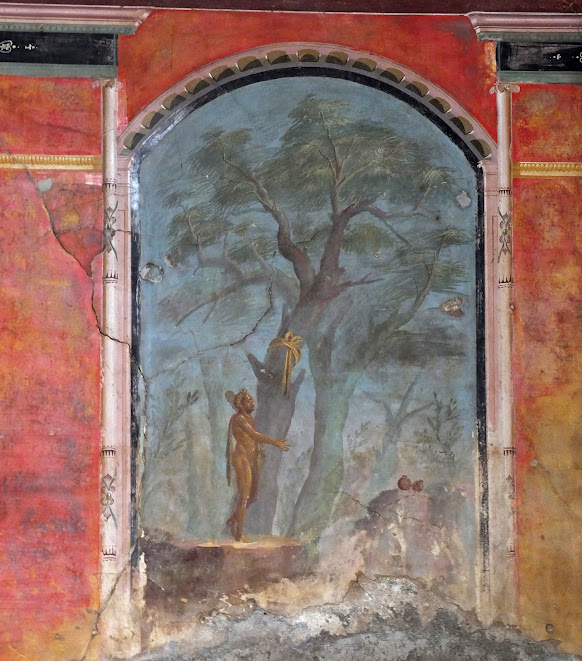 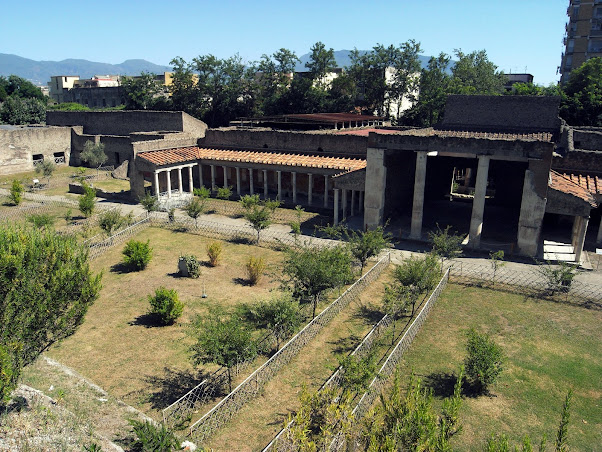 And that's all folks! I will update you all about my actual lived experience touring these sites once I get to Rome and settle into my new neighbourhood.

Do you think you'll adventure to these Ancient Roman sites? Let me know if you do and tell me what your experiences were like!

"Il Dolce Fare Niente": The Sweetness of Doing Nothing

How To Spend All Your Money 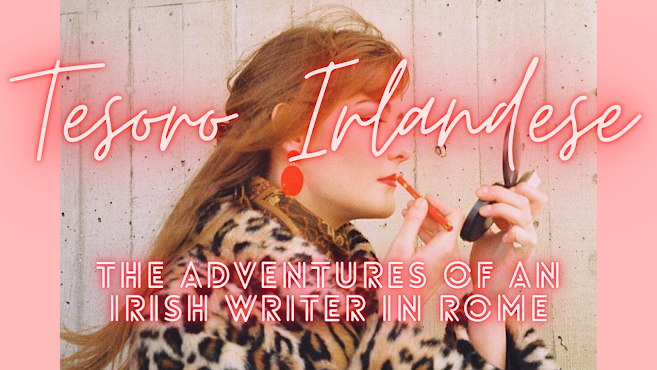 We're moving to Rome! ... And to our own website!  You heard right. This Blogger is DEAD.  You can find all the latest Tesoro Irlandese adventures over at  tesoroirlandese.com   We're gonna keep this page hanging here just in case we need it again & to honour our OG roots, but there'll be nothing new. So, GET MOVING!  See you over at Tesoro Irlandese ! Alla prossima,  Ciara O'Siorain (chi desidera diventare la bella donna figa come gli italiani) 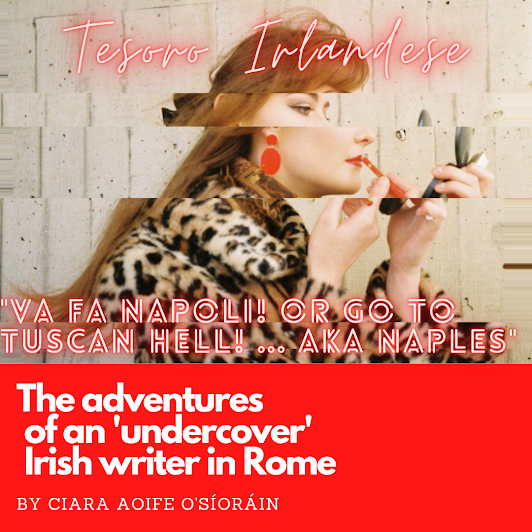 Va Fa Napoli! or Go To Tuscan Hell! ... AKA Naples

Va Fa Napoli! or Go To Tuscan Hell! ... AKA Naples One might remember this iconic phrase from the even more iconic Joey Tribbiani of the hit TV-show, Friends . In this episode, Chandler and Joey (the best of friends) fall out over a girl they both like. Every time Joey encounters Chandler, he tells him 'Vafanapoli!' But what does he even mean? Well, like the Reddit users arguing in this thread , Tuscans don't really use this phrase. What they REALLY say is far more vulgar, but if I put that on this blog I am going to have to use sensitive content warnings, so why don't you take a second to peruse this unassuming and totally innocent link ....  'Central Perk' by William Warby on Flickr Okay, now that you're on board, let's talk about Naples.  What's the deal with Naples? So, if Joey's insult is a fabrication, is there any truth to it? Why Naples?  Good question, Me.  In this post, I explore the good and the bad of Naples. However, I will be l